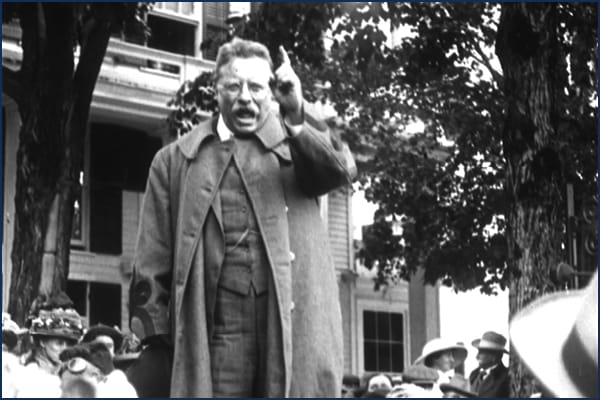 The Theodore Roosevelt Center (TRC) at Dickinson State University will be hosting a joint virtual presentation with the Sherman Grinberg Film Library titled, “Serving a Sufficiently Useful Purpose: The Roosevelt Family on Film,” on Tuesday, Jan. 17 at 7 p.m. (MT). To access the presentation, please click here.

Theodore Roosevelt was a master of media coverage, and the Library of Congress notes that, "he was the first United States President whose life was extensively recorded and preserved in the motion picture format." From his presidency, to the African Safari, to his Progressive Party political campaigns, many scenes from Roosevelt's life are documented on film. Thanks to a new cooperative effort, the TRC can now make many of these scenes more widely available to researchers.

The Sherman Grinberg Film Library has generously donated access to their historic newsreel footage to be published in the TRC digital library for research. The clips, which have been restored in high definition, capture in stunning detail Theodore Roosevelt campaigning and traveling abroad, as well as memorials to his life, and his family’s political activities in the decades following his death. Forty clips have already been published to the TR Center website, with plans for over one hundred to be made available in the future.

The presentation is free and open to the public. It will be held on Zoom and will last approximately one hour, including Q&A. Lance Watsky, Manager of Media Archives & Licensing at the Grinberg Library, will discuss the history of the historic Paramount and American Pathé newsreels in general. Dr. William J. Hansard, digital collections specialist at the Theodore Roosevelt Center, will discuss the significance of the footage of TR specifically. We hope you will join us for this exciting event!

About the Sherman Grinberg Film Library | The Sherman Grinberg Film Library, located in Los Angeles, California, is the world’s oldest and largest privately held film archive, with over forty moving image libraries. The library has over twenty million feet of film with content that ranges from 1895 to 1957. In addition to footage of TR, there are over 49,000 historic newsreel clips from the Paramount and American Pathé Newsreel Collections ranging in date from 1897 to 1957 on the Grinberg website to watch, download and license. For more information, please click here.