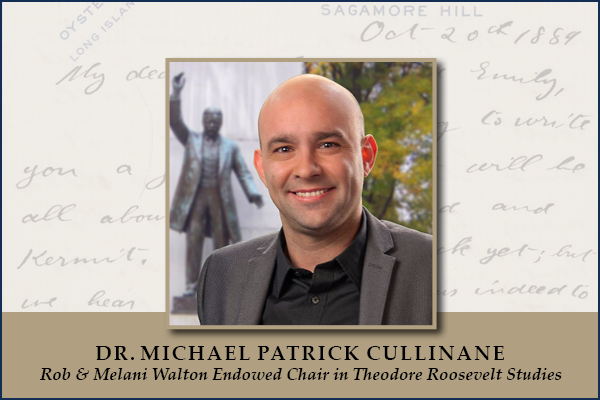 Dr. Michael Patrick Cullinane has been selected as the first recipient of the Rob & Melani Walton Endowed Chair in Theodore Roosevelt Studies. Established through a $2 million endowment from the Rob & Melani Walton Foundation, the position was created to provide a leading role in critically analyzing the life, career, and legacy of Theodore Roosevelt. Institutional supporters fund endowed positions to enhance research, teaching, and service.

“Thanks to the Rob and Melani Walton Foundation’s generous gift, Dickinson State University has added a second, prestigious endowed chair,” said DSU President Steve Easton. “The Rob & Melani Walton Endowed Chair in Theodore Roosevelt Studies will join the Dennis and Vaune Johnson Chair in U.S. History to put DSU at the forefront of Roosevelt-era scholarship.” The position requires an understanding of and commitment to original historical research and publication, undergraduate student success, and partnership with local stakeholders.

John S. Miller, DSU interim vice president and provost, shared the importance of this position, “Theodore Roosevelt continues to be an iconic presence in American history and in the history of the Dakotas. He was a multidimensional leader, both progressive and pragmatic, a committed conservationist and unabashed proponent of American expansion around the world. His actions and resulting legacy provide a wealth of research, enrichment, and writing opportunities for all students of American history.”

Michael Patrick Cullinane is one of the world’s foremost scholars of Theodore Roosevelt and his era. Cullinane is the author of “Theodore Roosevelt’s Ghost: The History and Memory of an American Icon,” which received the Theodore Roosevelt Association prize “[p]resented for exceptional scholarship to the most distinguished published book on Theodore Roosevelt.” In his most recent book, “Remembering Theodore Roosevelt: Reminiscences of His Contemporaries” (2021), Cullinane discovered long-forgotten interviews from Roosevelt’s wide circle of friends, colleagues, and family members. He is also the co-editor of three books and author of “Liberty and American Anti-Imperialism” (2012). Cullinane hosts a popular and well-respected podcast entitled “The Gilded Age and Progressive Era” and has appeared in several documentaries.

President Easton shared his excitement in bringing this renowned scholar to Dickinson State. “Dr. Cullinane is an impressive historian and author. We are proud that he will be representing Dickinson State University as an integral part of our Theodore Roosevelt initiative. He will be bringing much to our community, our university, and, most importantly, our students. We are delighted that current and future students will have the opportunity to learn with and from an internationally esteemed scholar of American history.”

Trained as a historian of foreign policy and the presidency, Cullinane was most recently a professor of U.S. History at the University of Roehampton in London. He is also a member of the Curatorial Council for the Theodore Roosevelt Presidential Library and Museum, set to open in 2026.

“I aim to inspire students to achieve their very best and to develop a passion for the study and skills associated with being a historian,” said Cullinane when asked about his goals for the position. “From my experiences as a student, I know the power of an inspirational teacher and believe my work follows in that tradition.”

Cordery shared, “I remain deeply grateful for my time at DSU and for the honor of having served as the first Johnson chair. Working with students, staff, and faculty, I believe we took important steps on several exciting initiatives, in and out of the classroom. I look forward to seeing them come to fruition.”

Cordery has returned, as planned, to her work at Iowa State University. She is thrilled about DSU’s newest TR scholar: “Mike Cullinane is a tremendous scholar and a wonderful person. He will contribute splendidly to all the great work underway at Dickinson State!”