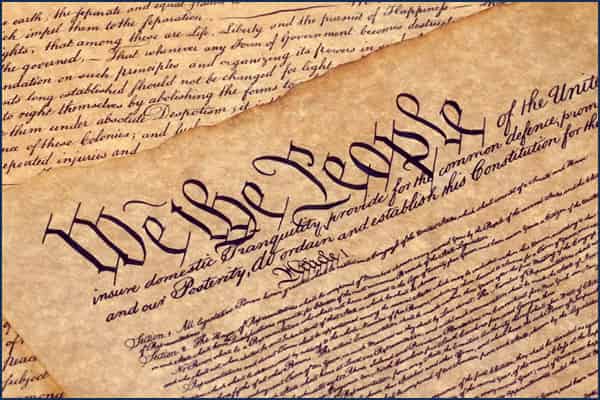 On Tuesday, Sept. 20, 2022, Dickinson State University celebrated Constitution Day by holding an informative presentation and panel discussion on the right to privacy. Steven Doherty, professor of political science and chair of the Department of Social Sciences at DSU, hosted the event, which included Jeff Wells, Dennis and Vaune Johnson endowed chair in U.S. history, presenting on privacy decisions made from court decisions; Marcus Fries, associate professor of mathematics and chair of the Department of Mathematics and Computer Science, presenting on privacy issues in the technological world; and Eric Grabowsky, associate professor of communication, presenting on how privacy is relatable to everyday life for American citizens.

Doherty’s goal of hosting this event was to educate and get audience members to think about how privacy pertains to the Constitution. “Today’s presentation had to do with the significant issue of the potential right of privacy through the U.S. Constitution. The Constitution has many guarantees of personal freedom and freedom from government. Privacy has always been one that has been debated quite a bit. As profiled by Dr. Wells, many different court decisions have influenced the way we have interpreted the right to privacy. This was a good explanation of a very nuanced and complicated issue in U.S. politics.”

“I got into some of the considerations about the rhetoric of privacy in the United States,” shared Grabowsky about his presentation. “I’m not a lawyer or a legal scholar, but I do think about rhetoric and communication politics. So, I tried to cover some areas that develop some of the constitutional matters but some of the political discourse broadly.” He added, “I think right now we are facing a time in history where we have an opportunity through this debate about right to privacy, to really face issues of rights, responsibilities, natural law, and what it means to be in the American legacy.”

Doherty hoped attendees would gain an understanding of what Constitution Day is as well as what privacy means in the Constitution. “Government gets more involved in so many activities in people’s lives now, more than it has in the past. The questions of what protections you have and what limitations there are about the government’s role in your life have become more important and crucial. Also, new technology, like what Dr. Fries presented, the fact that we have many ways of interacting with it that we didn’t have before, that needs to be dealt with and come up with some sort of ruling. Otherwise, there is a lot of confusion about these particular issues.”

During the panel discussion, several good questions and points were brought up that included privacy connections to other real-life aspects ranging from political topics to a more in-depth look at some of the specific court cases Dr. Wells brought up. Overall, the Constitution Day presentation gave all audience members an opportunity to think more deeply about privacy and how it pertains to the United States Constitution. Attendees left with a better understanding of the Constitution in terms of privacy and with questions that professors or experts who have studied the Constitution in detail might not be able to easily answer.