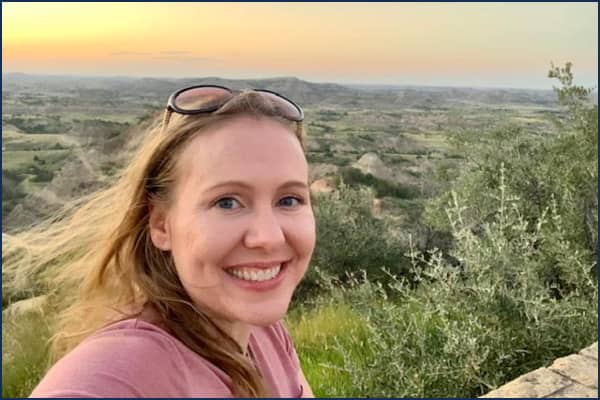 Do you know why Brittany Hirth, assistant professor of English at Dickinson State, chose DSU, what languages she knows, or what she enjoys most about teaching? Find out these and many more interesting facts about her in the following interview.

Where are you from, Professor Hirth?

I’m from East Hartford, Connecticut, which is a town of about 50,000 people. The town of East Hartford boasts that it “is the crossroads of New England and is located an equal distance from New York and Boston.” I grew up in the E.H. suburbs, but those major cities were always a short trip on the train or in the car. I do miss those cities, although I have fallen in love with the North Dakota Badlands.

Can you tell us a little about your life before you came to Dickinson State?

I grew up and went to school in Connecticut for 24 years until I left for graduate school and moved to Rhode Island. I spent about 15 years teaching in universities and colleges in Connecticut, Rhode Island, and Massachusetts. My life, so far, has always revolved around school, whether it was earning my three degrees or teaching. But I’ve also had other jobs as an undergraduate, such as in the service industry, which I think makes me even more grateful to be in a profession that I am passionate about—few things in life are worse than cranky customers.

I also met my husband in my graduate program, and we lived in Bristol, Rhode Island, a picturesque New England bay town, for a few years until we took jobs in North Dakota and Montana and moved.

What led you to choose DSU?

I chose DSU because, when I was on the job market, DSU was one of a few schools that wanted an American literature specialist as opposed to a generalist. I was excited to take a job that would enable me to use my specialized knowledge and skills. I’ve also been able to teach courses that I never have before, such as Mythology and Literary Criticism. I have a lot of opportunities to diversify my teaching skillset at DSU, and I knew that would be the case when I accepted the job offer.

I also liked the students when I did my teaching demonstration as part of the campus visit. I had a few interviews the year that I was on the market, and on one New York campus, I had students just stare at me while I did my teaching demo. But when I did the demo for the DSU students, they engaged me, smiled, and thanked me. I definitely thought about the students when I decided to take the job.

What is something you love about the subject you teach?

Just one thing? I love American literature, and I appreciate it more and more every time I teach a beloved text to a new class. I particularly like that American literature is a genre that can cause many students to re-evaluate American values and how the concept of America can shift over time. For example, the conception of America that is imagined by John Winthrop in his speech is certainly not the “America” of Allen Ginsberg or Louise Erdrich’s poetry.

Literature is just one way that we can evaluate our roles as citizens in a country with, hopefully, common values. My literary discussions often get students to think about what it means to be an American, which is something they have likely never thought about in a focused manner.

What do you enjoy most about teaching?

Teaching is most rewarding when I notice students acknowledging alternate perspectives, and their thinking starts becoming more complex. For example, in this part of the country, John Wayne is a beloved film icon. But when I teach Louise Erdrich’s poem, “Dear John Wayne,” I like seeing students understand that multiple ways of viewing an icon, or anything, is possible. I enjoy helping students to expand their thinking and be more open minded, even if they can’t agree with their opposition.

For that reason, I like teaching students how to be better writers, too, because if they can write well, then they are more fully able to participate as citizens. We often think about skills for the job market, which is important, but I hope that I’m also able to improve the lives of students by helping them to see that reading and writing can expand their horizons and give them more ways to learn throughout their lives.

Do you have an accomplishment that you are most proud of?

The most recent accomplishment would be from the spring: DSU honored me with an award for my research. It felt good to be noticed for my scholarship because publishing is often a very solitary activity, and you never know who, if anyone, notices your research until you’ve been cited. So, it felt good that my efforts were noticed by my university.

I’m also proud of a teaching award that I won in 2016, though, too, because my students nominated me for it and wrote letters of support as part of the application.

In my free time I love to travel. I’m usually in Florida a few times a year. I also like hiking although I’m not very good at it. I stop for snacks a lot and complain about the heights. My favorite free time activity is reading, but that sort of blends in with what I do as a profession.

A recent addition to my family is a kitten I adopted from Oreo's Animal Rescue. He's almost a year old now and very talkative. His name is Valhalla. 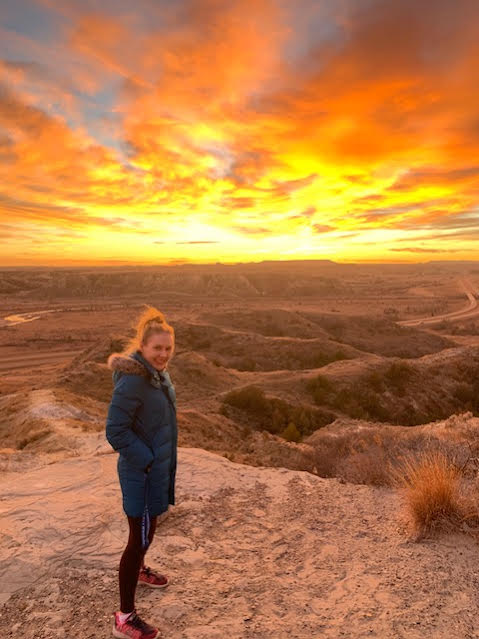 Travel abroad has been difficult due to COVID-19 measures, but I’m hoping to go somewhere tropical on vacation. I would love to go back to Aruba, but I’m also brushing up on my Spanish because I want to see Spain. When I went to Mexico, I insisted that all the locals speak Spanish with me so I could practice, and I kept apologizing, in Spanish, and told them my grammar is terrible. They all smiled and said, “No!” But I think they were all too nice. I assume the Castilians would put me in my place, and I would finally know if my accent is, indeed, bad.

I’d like to be fluent in Spanish, and then my future goal is to learn Italian and to speak the language my grandparents did. I grew up hearing my grandmother speak it all the time with her mother, who never did learn English. My grandmother arrived in America when she was 17 and immediately wanted to assimilate, so she didn’t teach her children Italian. I think it would be fun to know more Italian than just the handful of phrases I heard all the time.

Thank you for speaking with us, Professor Hirth! We’re proud you’re a member of the Blue Hawk family!