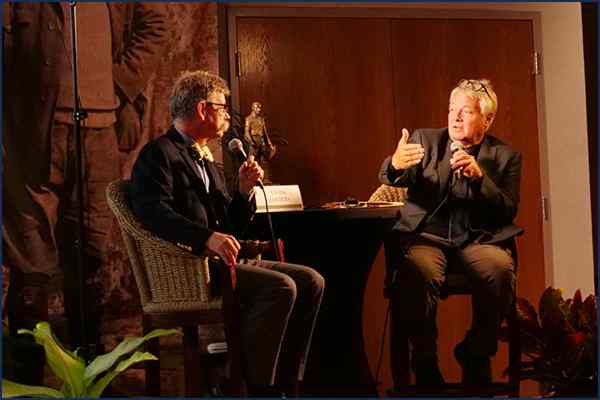 The silent countdown in the audio booth at the back of Beck Auditorium Thursday night signaled that the 17th annual Theodore Roosevelt Symposium would soon be underway. This year’s theme, The Athlete in the Arena: Roosevelt and the Development of Modern Sports, focused on Roosevelt’s advocacy of the strenuous life and his role in the development of sport in the United States. Furthermore, the three-day event explored Roosevelt’s views and activities and placing them in the larger context of late Gilded Age America and the coming of the American Century.

“The emphasis on the strenuous life provided us with a wonderful range of speakers, from TR experts known around the world to coaches and athletes from our area,” stated DSU President Steve Easton. “Everyone did a great job of educating us about TR’s emphasis on sports and education.”

Michael Patrick Cullinane kicked off the opening night of the symposium with his keynote address focusing on The Field of Play: Strenuous Living in the Gilded Age and Progressive Era. Cullinane, an award-winning author and Lowman Walton Endowed Chair of Theodore Roosevelt Studies, detailed his keynote on how Roosevelt’s life fit into strenuous living in the era – an era which Cullinane believes is the most transformative era in American history. Cullinane set the scene for the three remaining speakers – who covered a variety of topics from physical fitness and professional sports to American women’s sports to Roosevelt’s athletic quest.

Simon Cordery opened Friday’s action-packed day with his lecture on the topic of Physical Fitness, Professional Sports, and American Nationhood in the Age of Roosevelt. Cordery, an award-winning author and historian of the transatlantic modern world, focused on the development of sports during Roosevelt’s upbringing and how physical fitness and professional sports played a role in the life of Roosevelt and the United States. After a quick reflection on muscular Christianity from Tyler Doohen, Anne Blaschke followed with a lecture on the topic of American Women’s Sport in the Era of Theodore Roosevelt. Blaschke, a historian of twentieth-century U.S. political culture at the University of Massachusetts, aimed her lecture on women’s sports in the time of Roosevelt. The final lecture was voiced by Ryan Swanson, an associate professor of history at the University of New Mexico. Swanson focused his lecture on the topic of Never a Champion: Theodore Roosevelt’s Bumbling but Beautiful Athletic Quest – examining Roosevelt’s health struggles and his physical limitations throughout his life.

The day continued on with a four-member coaches’ panel comprised of Thadd O’Donnell, Senator Rich Wardner, Kelsey Boedecker, and Michelle Orton. The panel answered questions about their time being coaches, while relating it back to Roosevelt’s era.

After a quick book signing, the agenda switched to another building on campus – one that was recently renamed in honor of long-time supporters of DSU and Theodore Roosevelt studies. Pulver Hall was officially renamed Lowman Walton Hall in honor of Melani Lowman Walton and Rob Walton’s DSU community support and dedication to making the life, legacy, and enduring relevance of Theodore Roosevelt accessible to all. The building will house the Theodore Roosevelt Center on the lower levels and classrooms and student housing on the upper floors. The first floor will feature an exhibit highlighting a piece of history that connects to Roosevelt himself.

The momentum then switched to historic sports edutainment in May Hall Friday night. The night was filled with staged performances by DSU students, staff, and faculty including a Glee club, a 1905 wrestling demonstration, trick ropers from the DSU rodeo team, and a 1905 women’s basketball exhibition.

The final day of the symposium consisted of a walkthrough of the new Lowman Walton Hall exhibit – which highlighted photographer Edward S. Curtis – and ended with a field trip to the historic Medora area. Attendees were able to visit the Theodore Roosevelt Presidential Library and given the option of a hike in the Badlands or a walking tour of Medora and Chateau de Mores.

“It was great to have visitors in Dickinson for the TR Symposium again,” continued Easton. “Those of us fortunate enough to live in southwestern North Dakota sometimes forget what a special place it is. There is something mighty fun about taking someone into TR’s beloved Badlands and seeing their enthusiasm.”

The three-day event saw over 160 attendees from around the region – including an online presence with virtual participants. The event would not be possible without the help and support from numerous individuals and organizations including Humanities North Dakota; the Rob and Melani Walton Foundation; DSU students, student-athletes, faculty, and staff; and guest speakers.

“The TR Center would like to extend a special thanks to all of the students of the Theodore Roosevelt Honors Leadership Program who helped to run the event and to the student-athletes who performed in the edutainment portion of the symposium,” stated William Hansard, digital collections specialist for social media and education. “This event could not have happened without their enthusiastic participation, and our attendees were so happy to see their smiling faces. These students represent the best of DSU, and we are so proud of them and the hard work they put in for the TR Symposium!”