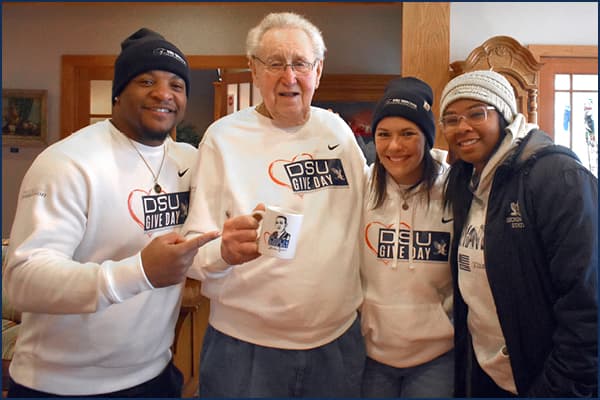 Dickinson State has always been a special place and it showed why the saying, ‘Once a Blue Hawk, always a Blue Hawk’ is the University’s mantra. On Tuesday, the Dickinson State University Heritage Foundation (DSUHF) celebrated another successful Give Day during their 24-hour challenge period, thanks to generous gifts from over 270 donors. In total, the 2nd annual Give Day event surpassed the lofty goal set at $75,000 and raised over $78,000 towards student scholarships and programs – nearly $20,000 more than a year ago.

“This was a great day for Dickinson State, our alumni, and our friends,” stated DSUHF’s executive director Ty Orton. “The support of the University on Tuesday, which allows us to enhance the lives of our students with scholarships, is remarkable. On behalf of the Heritage Foundation, we thank everyone who donated and continue to change the lives of students here at Dickinson State.”

In addition, the 24-hour Give Day marked new highs from a year ago. On top of surpassing the goal of $75,000, DSUHF’s give day coordinator Myren Moore, and the DSUHF staff, checked off more goals including having a donation from each of the 50 states and numerous first-time donors – capturing a new generation of Blue Hawk supporters.

“For me, it’s the community and the supporters of DSU,” stated Moore. “The support from current students and recent graduates is what makes Dickinson State extraordinary. Having individuals donate, even five dollars, goes a long way. Every dollar matters and the fact that the younger generation is already giving back to the University is a telling sign about how special Dickinson State is.”

The event, which included a breakfast and lunch drive to start the day, would not have been possible without the support of the Winn family.  Billie and Willie are proud Dickinson State supporters. Even though they didn’t get the opportunity to attend DSU, three of their children, as well as their granddaughter did. “Giving back to the community that has helped us be successful is a privilege,” stated the Winn family. “We agreed that if we were ever able, we would help others, as many good people have helped us over the years. We believe in creating and building partnerships to drive workforce development and keep our young people in Dickinson.”

As one Give Day ends, the preparation for the next one begins.  The DSUHF is excited to release details, goals, and challenges for next year. Stay tuned!