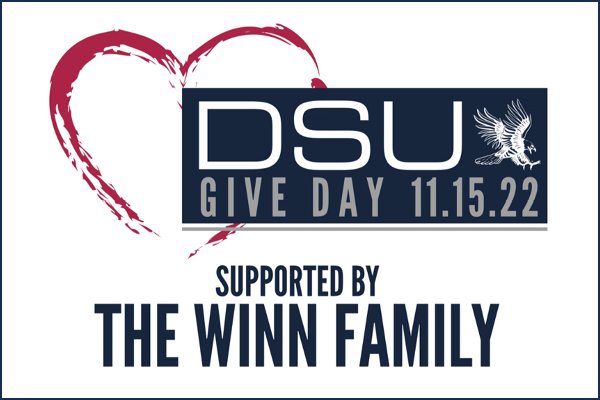 The Dickinson State University Heritage Foundation (DSUHF) is set to host the 2nd annual Give Day on Tuesday, Nov. 15, to support student scholarships and programs at DSU. This year, the DSUHF staff has set their sights high - with a lofty goal of raising $75,000 in 24 hours. Donors who wish to donate in person will be able to via a drive-in event at the DSUHF house (230 8th Ave West – Dickinson), while donors wanting to give virtually can by clicking here.

The drive-in event would not have been possible without the support of the Winn family. Billie and Willie are proud Dickinson State supporters. Even though they didn’t get the opportunity to attend DSU, three of their children, as well as their granddaughter did. “Giving back to the community that has helped us be successful is a privilege,” stated the Winn family. “We agreed that if we were ever able, we would help others, as many good people have helped us over the years. We believe in creating and building partnerships to drive workforce development and keep our young people in Dickinson.”

On Tuesday morning, the day will kick off with a breakfast drive from 6-9 a.m. (MT). Donors who give at this time will receive donuts courtesy of Baker Boy and an exclusive TMI Systems, Inc. legacy mug. This year’s mug features former DSU coach and admissions director and physical education faculty emeritus, Lavern Jessen.

Jessen was selected as this year’s legacy in recognition of his years of service to the institution and to his country. “With Give Day occurring just days after Veteran’s Day, celebrating a two-tour veteran seemed like the right thing to do,” stated DSUHF executive director, Ty Orton. “Lavern still lends his leadership whenever and wherever needed on-campus, and it is an honor to recognize him.”

The lunch drive will run from 11 a.m. - 1 p.m. (MT) and participants at this time will receive slices of Papa John’s pizza. The first 200 cars will also receive a drive-in T-shirt. Papa John’s has not only generously donated pizza, but they will be running specials during the month of November. Patrons can use the code DSUWINS15 to receive 15% off of their pizza and 15% of the total order being donated to the Blue Hawk Scholarship Fund.

In addition, over $10,000 in matches have already been established so far for the event. Dickinson State University President Steve Easton has pledged a $5,000 match for academic scholarships. Other matches include alumni and honorary captain, Steve Purdue, pledging $5,000 towards the 100 years of DSU Football Campaign, and former football student-athlete and current detective, Kylan Klauzer, challenging his teammates to match his $1,000 donation.

“We thank the community for their early support for Give Day,” added Orton. “We had such a great turnout last year, and we are very excited to welcome people again as we work together to support students. These generous gifts truly make a difference.”

Donation matches can be established until the end of the day on Monday, Nov. 14, by contacting the Dickinson State Heritage Foundation at 701-483-2486.