Making a difference - Olympian gives back with softball clinic 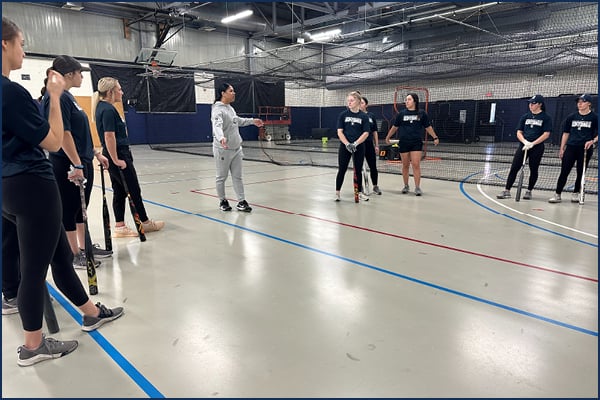 The Blue Hawk and Dickinson softball community had the honor of attending a clinic hosted by 2020 Olympic Silver Medalist, Dejah Mulipola, last week in Dickinson. Mulipola, a standout softball player, completed her senior season as a University of Arizona Wildcat in 2021. In that season alone, she earned several honors including: NFCA Catcher of the Year, NFCA First Team All-American, Pac-12 All-Defensive Team, First-Team All-Pac-12, and NFCA All-West Region catcher. She also finished fourth in the NCAA in RBIs and eighth in home runs, led the Pac-12 in home runs, RBIs, walks, and on-base percentage.

Her success translated to the next level when she won the 2022 Athletes Unlimited Softball (AUS) Championship in just her second year in the league. The AUS is different than a traditional professional sports league, as the players rotate teams each week and the championship is awarded to the player who accumulates the most points, based on individual and team performance each week. On the world stage, she is a .389 career hitter for Team USA. In 2020 she took a year away from Arizona to take part in the Stand Beside Her Tour with USA Softball in preparation for the 2020 Olympics.

“My experience with Dejah was great,” mentioned DSU softball player Hope Fath. “I really liked how she wasn’t just there to help us hit and show us drills. She engaged with us in good conversation and opened up to us about softball and her life and I really liked that.”

Mulipola began her softball journey at the age of four. Her mother and aunts played before her, so it was expected that she continued that tradition. As a young athlete, she was always competing with her brother, who played football, but was also jealous of her friends and family that got to spend time outside of softball. Every moment that was not spent in the classroom, Dejah spent out on a field practicing or watching games with her dad to get better.

As much as she wished for a different childhood at the time, she always had the goal of getting her own USA softball team poster – like the many that hung in her room. She was that ten-year-old who carried around a protein shake wherever she went and spent weekends at tournaments instead of school dances. Never did she realize it would take her this far. She attended a University of Arizona camp her sophomore year and instantly fell in love with the program and school. Coach Mike Candrea pulled her into his office after the camp and Dejah signed then and there.

“I hope that student-athletes were able to listen to her story and relate it to their own story and know and understand no story is perfect,” stated DSU’s head softball coach Kristen Fleury. “We all go through good times and hard times, and it takes hard work and dedication to chase something you are passionate about. I hope they took away that no matter what it is in life, we can all be really good at something if we stick with it and put in the work. When times get tough, the easy thing to do is quit but to rely on your support system and remember your why – why do you do what you do.”

After the clinic, many DSU student-athletes reflected on a singular quote she shared, "people don’t care about what you have to say until they know you care.” Being a leader on many teams, Mulipola shared that her leadership skills have evolved because of this quote.

Senior DSU softball player Rhea Paiva added, “she made me look at my senior year a little differently.”

Dejah continued, "it is important to make these clinics possible for all athletes because I want to make an impact wherever I go, whether that involves sports or not." These small clinics allow her to build an intimate and genuine relationship with each athlete. She also shared that it is important for athletes to soak up these last moments and find enjoyable ways to stay connected to the sport that has given them so much. Dejah emphasized that beyond passions in sports, creating a life outside of athletics and finding hobbies is something that many athletes need to make a priority.

“Dejah is very humble and kind for a softball player of her caliber,” added DSU softball player Emma Woodworth. “I’m thankful for the opportunity to have heard her story and I will carry the mental and hitting aspects into my last season as a Blue Hawk.”

The free camp would not have been possible without the support and sponsorship by the DSU Softball and the Dickinson Diamonds programs.

Mulipola is currently a volunteer assistant coach at the University of Missouri-Kansas City and is on the Team USA and Athletes Unlimited rosters.