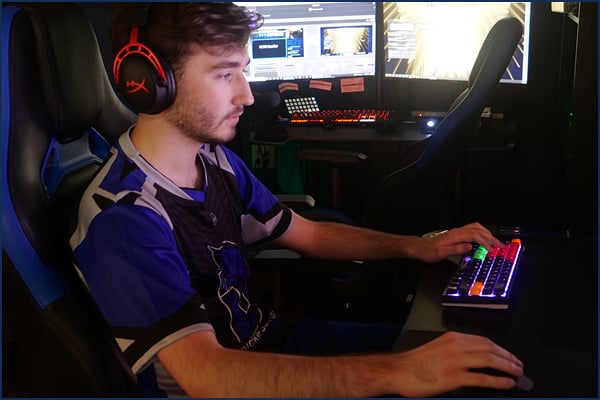 Prior to the second-place win, the varsity team was undefeated in their region.

Of the Valorant team’s many accomplishments this year, their first-place win in the Collegiate Champions League (CCL), a midwest regional competition, was a highlight for the players and Josh Nichols, the university’s esports coordinator.

Eli Egli, the team’s captain, said it was his proudest moment this season.

“We made a trip down to South Dakota and blew the last team (the Dakota State Trojans) out 3-0,” he said. “We did not even lose one map to them. That was our first time ever beating that team. They beat us two times before that.”

Nichols said he’s proud of all the hard work the team put in this semester.

“They performed well in all of their tournaments but being able to compete in-person at a LAN event and leave victorious is a great feeling,” he said.

Nichols attributes the teams’ successes, in part, due to the team members’ ability to work together.

“Communication is huge in esports,” he said. “Our teams tend to be friends in and out of the games, and those close relationships translate to great comms and strategy in-game.”

Individually, the season’s statistics have helped make team member Wentz Mosqueda one of the top 3,000 Valorant players in North America.

While just five players compete at a time on a Valorant team, roster sizes can vary per tournament, and the program is looking for new recruits.

“We are looking to bolster our current Valorant roster and also would like to add a second team so we have a lot of flexibility for adding additional players,” Nichols said.

Although the Valorant team is the only current team in the program since the program’s inception in 2019, DSU esports players have played Fortnite, Rocket League, Apex Legends and Rainbow Six, in addition to Valorant, and are considering adding Overwatch 2 in the near future.

“COVID sort of put a halt on some of our growth as it affected some students returning and some recruits from arriving,” Nichols said. “Despite that, we have a winning Valorant team, we are working on enhancing our broadcasts, and we have a great foundation upon which to build a really successful program.”

Individuals interested in getting involved in DSU esports can do so by volunteering with programming, social media, broadcasts, events, and other team activities.

“Our esports team goes beyond just varsity play, and we want students to be a part of it,” shared Nichols. “Whether a student is majoring in writing, computer science, communications, business, or esports, we can find a fit for them in our program!”

For more information, or to follow DSU esports, please visit dickinsonstate.edu/esports. To volunteer or be recruited to the team, please contact Josh Nichols via email at Joshua.Nichols@dickinsonstate.edu or call 701-502-4386.