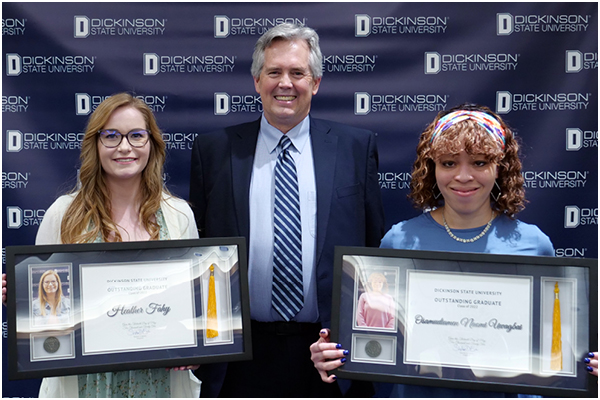 The Outstanding Graduate Award is the highest honor bestowed on graduating seniors by the university. Fahy and Uwagbai were nominated along with 17 other students by faculty in their academic school or department for exceptional performance in their field of study.

Heather Fahy, daughter of Myron and Kristine Hintz, is graduating from Dickinson State University with a Bachelor of Science in Nursing and a minor in leadership studies. The Dickinson, North Dakota, native’s primary goal is to make a difference for her patients and her community.

Fahy is a member of the Theodore Roosevelt Honors Leadership Program (TRHLP), the Theodore Roosevelt Executive Committee, the DSU Nursing Student Association, the Nursing Pinning Ceremony Committee, and the Nursing Department Scholarship Selection Committee as the senior nursing student representative. Outside of Dickinson State, Fahy has been involved with Sherry’s Wishes 5K Walk/Run, serving as a volunteer race coordinator from 2015 to 2020.

As a second-year nursing student, Fahy was awarded the Highest Grade Point Average for the Licensed Practical Nursing Program, and she was named Student Nurse of the Year in 2020. In the spring of 2021, she was recognized for her writing skills, having earned the Outstanding Writing in the Department of Nursing award.

While serving on the Theodore Roosevelt Executive Committee, Fahy helped organize community events, including a volunteer opportunity in which she and her fellow TRHLP scholars were able to paint at the House of Manna, a Dickinson non-for-profit organization assisting those in poverty. In her leadership role as Student Nurse of the Year, her most important accomplishment was organizing a bowling event, Strike Out Burnout. She organized this event to provide a self-care opportunity and bring awareness to nurse burnout, an issue plaguing the profession in the current pandemic. Finally, she served as a nursing peer tutor. In this role, she mentored several of her fellow nursing students, helping them find success in the classroom and clinical settings.

Fahy works as a licensed practical nurse at CHI St. Alexius Health in Dickinson on the medical-surgical unit. During the height of the pandemic, she provided nursing care to critically ill COVID-19 patients.

After graduation, Fahy plans to continue working at CHI St. Alexius Health in Dickinson as a registered nurse. She wants to continue giving back to the community that has supported her on her journey to becoming a nurse. After gaining some experience, she would like to continue her nursing education by attending graduate school to become a women’s health nurse practitioner or a nurse educator.

Osamudiamen Naomi Uwagbai, daughter of Osameke and Josephine Uwagbai of Lagos, Nigeria, is graduating with a Bachelor of Science in Information Analytics, a Bachelor of Science in Mathematics, and a minor in leadership studies. Her time at DSU has helped her grow into a confident leader who is unafraid to tell the truth, fights for the underdog, serves her community, and lends help whenever needed.

In 2018, Uwagbai served as a New Student Orientation Leader, helping incoming freshman get acquainted with and settled in at Dickinson State University. As a TRHLP scholar, she works with the DSU campus and Dickinson communities through such initiatives as the Backpack program and Brave the Shave and with other organizations like the House of Mana.

During the summers of 2020 and 2021, Uwagbai worked for the Theodore Roosevelt Medora Foundation, during which she made lifelong friends.

After graduating, Uwagbai would like to be a data scientist or a data analyst in a biology lab because she has an interest in rare genetic conditions and what causes them. She would also like to get a master’s or doctoral degree in biostatistics after one or two years of working.