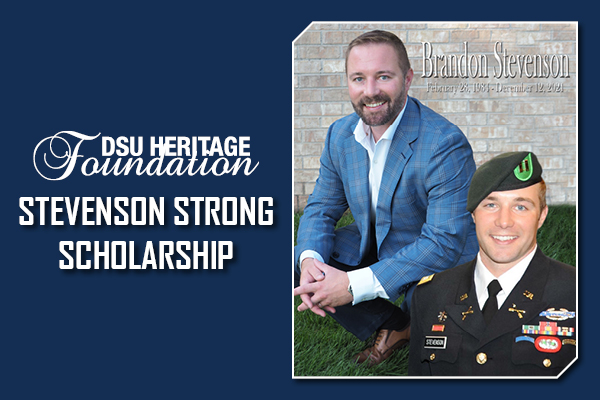 In honor of Brandon Stevenson, several Dickinson State University friends and supporters have created the Stevenson Strong Scholarship. It is our sincere hope that this list continues to grow each year as Brandon’s memory continues to live on and impact more people.

Brandon Stevenson was born in Miles City, Montana, in 1984. He and his family spent the early part of his life in Baker, Montana, before moving to Dickinson in 2001. He attended and graduated from Trinity High School where he excelled in football, wrestling, and track.

Following high school, Brandon was nominated to the U.S. Military Academy at West Point. He graduated in 2007 with a bachelor’s degree in history and was commissioned as an Army Infantry officer. During Brandon’s 10 years in the army, he earned many distinguished awards including the Army Ranger and Special Forces Tabs, as well as Combat Infantryman, Combat Action, Air Assault, and Airborne badges. Brandon entered the United States Army Special Forces in 2021 and earned the coveted and distinguished Green Beret. He faithfully served the nation with seven deployments taking him all over the world to include three tours to Iraq, Libya, Jordan, Germany, and Niger where he was awarded two Bronze Stars for his valor in combat. Perhaps Brandon’s greatest military accomplishment was the deep and life-long friendships he built with his Army brethren.

Above all else, Brandon was a family man. He married his best friend, Wendy Jorde, and together they brought into the world two beautiful children: Alder and Hadley. Brandon was a committed son, brother, husband, and father.

Brandon was a hard worker who was driven, dedicated, and passionate about anything he took on. He was also very compassionate and had the ability to relate to people of all ages and backgrounds. It is in honor of his selfless passion and leadership skills that this scholarship is started.

The Stevenson family has served and been an integral part of the Dickinson community for over 20 years and are loyal supporters of Dickinson State University. The Stevenson family has also guided hundreds of other families through grief and loss. Now, as the community they have supported rallies around them, we will work to ensure Brandon’s drive, focus, and positive energy lives on for years to come.

To make a donation to the Stevenson Strong Annual Scholarship, please contact Pam Rudolph at the DSU Heritage Foundation at pamela.rudolph@dickinsonstate.edu.