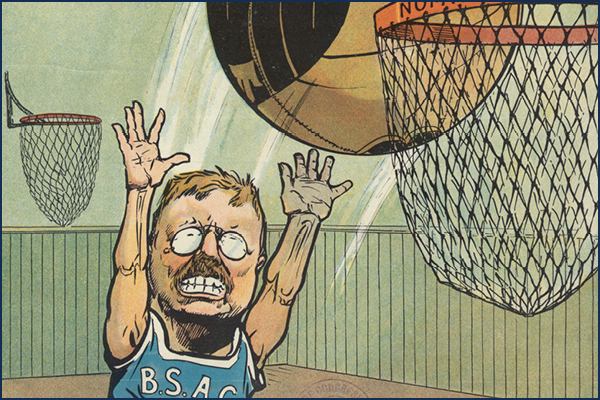 Cartoon originally on the cover of the March 4th, 1908, Puck magazine.

This year’s public humanities symposium explores the athletic world in the Age of Roosevelt and changing American notions of physical fitness against the era’s social transformations. Topics include the beginnings of basketball, the taming of collegiate football, the social and cultural search for “the strenuous life,” the debate over physical education for women, and Roosevelt’s life as a sportsman, including boxing, wrestling, stick fighting, point-to-point hiking, skiing and martial arts.

Other event highlights include Roosevelt-era, sport-centric edutainment Friday evening and an educational hike in the Badlands led by Theodore Roosevelt Humanities Scholar Clay Jenkinson on Saturday.

The symposium also coincides with the grand opening of a new space on campus for the TR Center, which will include offices for staff, scholars, and student workers; living quarters for students of the Theodore Roosevelt Honors Leadership Program; video and podcasting studios; event space; exhibition galleries; archival storage; and more. In addition to a well-stocked research library, the building will house a scale replica of Roosevelt’s reading room at Sagamore Hill, his home in Oyster Bay, New York, which will include copies of many of the books that Roosevelt himself owned. With this new space, the TR Center will be able to exponentially increase its efforts towards becoming the central hub for scholarly research on Theodore Roosevelt and the world in which he lived.

For more information and to register, please visit the Theodore Roosevelt Center website at www.theodorerooseveltcenter.org. For specific inquiries, contact William Hansard at william.hansard@dickinsonstate.edu or 701-483-2814.

The 2022 Theodore Roosevelt Symposium is supported by the Rob and Melani Walton Foundation. It is also funded in part by Humanities North Dakota, a non-profit, independent state partner of the National Endowment for the Humanities.