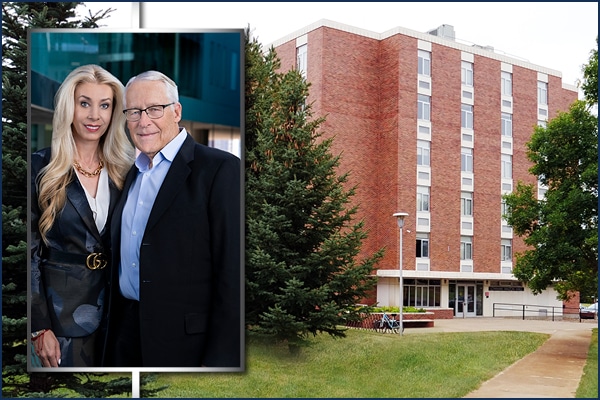 DICKINSON, N.D. (Sept. 16, 2022) – Dickinson State University (DSU) is pleased to announce the renaming of Pulver Hall to Lowman Walton Hall in honor of Melani Lowman Walton and Rob Walton for their long-time support of the DSU community and dedication to making the life, legacy, and enduring relevance of Theodore Roosevelt accessible to all.

In December 2021, the DSU Heritage Foundation and DSU announced a $10 million gift from the Rob and Melani Walton Foundation to support the Theodore Roosevelt Center (TRC). The gift supported DSU’s vision to create a permanent home for the TRC in the renovation of Pulver Hall and to secure the future of Theodore Roosevelt studies at DSU for years to come.

“Rob and Melani’s generous gift will have a lasting impact on the Dickinson State community, our state, and, indeed, the world,” noted DSU President Steve Easton. “Due to this ongoing support, DSU students will be inspired by Theodore Roosevelt’s legacy and scholarship. The values Theodore Roosevelt stood for match our values: integrity, accessibility, excellence, inquiry, and innovation.”

The grant will help support the TRC in their efforts to expand digitization and archiving efforts, so materials are accessible to the public and related public education. It also establishes an endowed chair to facilitate Theodore Roosevelt studies and promote the TRC, DSU, and Theodore Roosevelt scholarship nationally and globally.

“We are honored to support the new home of the Theodore Roosevelt Center so his life, work, and impact can continue to inspire future generations,” said Melani and Rob Walton. “DSU is a special place for our family, and we are hopeful this new building will be a gathering place for Blue Hawks to learn, live, and lead.”

The Rob and Melani Walton Foundation and DSU have a long relationship. Melani Lowman Walton hails from a family of proud Blue Hawks. She is a third-generation Dickinson State University alumna, Hall of Fame member, and a standout athlete in basketball and track and field. She grew up in eastern Montana near the North Dakota border and has been visiting Medora and the Theodore Roosevelt National Park since childhood.

To continue the recognition of the late Dean LeRoy Pulver, the top two floors of Lowman Walton Hall, which feature sizeable open study spaces, private bathrooms, and excellent views of the DSU campus, will be named the Pulver Suites.

Dean Pulver was a leader at Dickinson State Teachers College (DSTC) from 1931 until his retirement in 1963. Pulver held a Bachelor of Arts degree from Cornell College and a Bachelor of Divinity degree from Garrett Theological Seminary. Mr. Pulver served as head of the commerce department at DSTC for twelve years before being appointed dean of men. Dean Pulver also served as the unofficial campus chaplain and held roles in the administration during very challenging times, including throughout the great depression. Known for his active role in Phi Delta Kappa, the national honor society of teachers, and Phi Sigma Pi, the society of scholarship, leadership, and service, where he was appointed as the national president for two years, Dean Pulver was well respected by the campus and Dickinson communities.

Dickinson State University: Dickinson State University is a regional comprehensive institution within the North Dakota University System, whose primary role is to contribute to intellectual, social, economic, and cultural development, especially to southwestern North Dakota. The University’s mission is to provide high-quality, accessible programs; to promote excellence in teaching and learning; to support scholarly and creative activities; and to provide service relevant to the economy, health, and quality of life for the citizens of the State of North Dakota.

Theodore Roosevelt Center: The Theodore Roosevelt Center at Dickinson State University (DSU) preserves and analyzes the legacy of America’s 26th president, one of the most remarkable statesmen and intellectuals in American history. Launched in 2009, the Center has proactively accomplished this objective through the following major initiatives, such as creating a digital library to serve as a repository for all Roosevelt-related documents, photographs, and ephemera, offering educational programming, and hosting an annual symposium. The Theodore Roosevelt Center is located on DSU’s historic 100-acre campus in Dickinson, North Dakota.