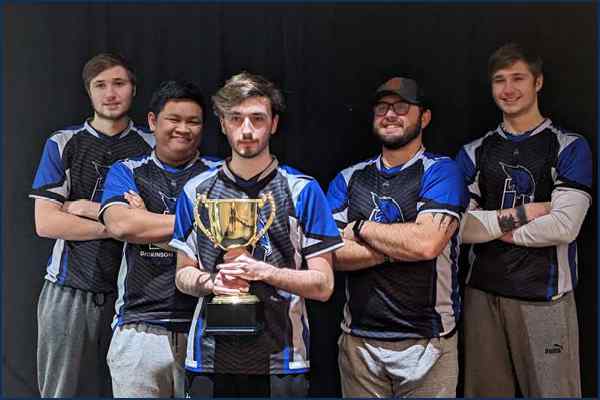 The Dickinson State University (DSU) Valorant esports team was crowned champions of the Collegiate Champions League after taking down heavy favorite, Dakota State, in three-straight matches on Sunday night. With the win, the Blue Hawks handed Dakota State their first loss of the season.

"Going from a fourth place finish last spring, to being crowned the champions this fall, has been outstanding,” stated DSU’s esports coordinator Josh Nichols. “Our team has proven to be a real contender in our region and we are looking forward to defending our title in the spring!”

In the quarterfinals, DSU secured their spot in the Champions League finals after winning the first two matches in a best-of-three game series against University of Wisconsin – Lacrosse.  The Blue Hawks took down Lacrosse 13-11 and 13-3 to claim their spot against Dakota State on Sunday night.

In the final match of the tournament, DSU swept the first three rounds – in a best-of-five series – against Dakota State University to claim the title. The Blue Hawks came out strong during the first match with a 13-5 victory and stayed victorious after a close 13-10 win to push their lead up to 2-0 overall. The final match ended the tournament much earlier than anticipated – with a 13-4 victory to secure the upset win.

"Every player showed up today with teamwork, aim, and a strong mentality,” said Valorant team captain Eli Egli. “It was great to get the win and to defend our title in the spring.”

"Everything we’ve worked on throughout the season finally clicked together,” said Valorant team member Jacob Scully. “Everyone did their job and our teamwork is what carried us to the 3-0 victory!"

Upcoming Information | The Blue Hawks are scheduled to play in the National Esports Collegiate Conference (NECC) semi-finals on November 28th, 2022.  They are currently undefeated in their region. If they win, they will move onto the finals on December 5th, 2022.

About Valorant | Valorant is a tactical shooting game involving two teams with 5 players in each team. The team that wins 13 rounds first, wins the game (must win by at least two points).