Former Blue Hawk gives back in the classroom 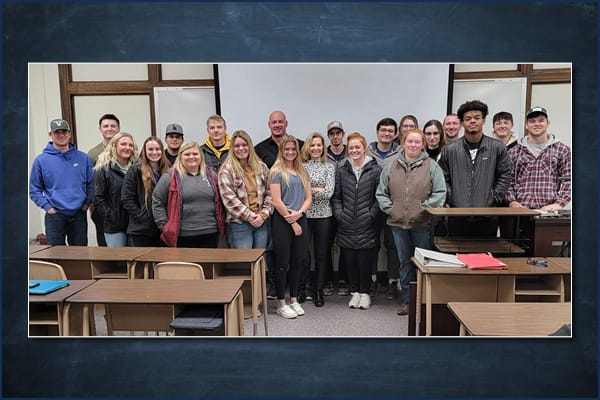 Dustin Roberts credits Dickinson State University faculty and alumni connections for starting him on his successful career path. Roberts is an area manager for ChampionX, a global leader in chemistry programs and services, artificial lift solutions, automation and optimization equipment, and drilling technologies. Roberts has worked a five-week-on, five-week-off schedule in West Africa for over a decade. The 2005 business administration graduate recently visited Debora Dragseth’s Management and Leadership class to talk about his global experiences.

Roberts stressed to the students, "a good leader will find people they trust and who trust them." In countries such as Angola and Chad, Roberts noted, "societal norms are significantly different, yet just like in the United States, the key to success is to communicate, communicate, communicate!" The students asked many questions and learned some interesting facts; for example, candy, specifically licorice, is an effective bartering tool to get a cab ride in Angola.

Dr. Dragseth met up with her former student and Blue Hawk football player at the Dickinson State University Homecoming football game this fall and made plans for Roberts to visit her class the next time he was in Montana.  “Dustin drove 450 miles from western Montana to spend the morning with our students,” Dragseth said. “It meant a lot to me and my class as well. Dustin is extremely invested in giving back to his alma mater.”